A guide devoted to celebrating the 50th anniversary of the dedication of the Axinn Library building.

There are a number of interesting examples of the Brutalist style on Long Island. Many survive and can be seen today - others have been demolished but are documented with photographs or drawings. We are interested in collecting additional photo documentation!

The construction of the Endo Laboratories building began in 1962 and was completed in 1964. At the time, the fortress-like appearance of this building was the cause of great controversy in local government of Garden City and public opinion. The drama played out in the New York Times, from this November 4, 1962 article showing an architect's model, through completion. On April 4, 1964, Ronald Maiorana reported that a screen of trees was put in place to hide the structure from travelers on the Meadowbrook Parkway. The prominent architecture critic Ada Louise Huxtable declared the buildilng "triumphant" at its dedication in September, 1964. She wrote, "In the muddled mediocrity of Long Island's architectural junkyard, Endo's boldly unconventional research, manufacturing, and administrative headquarters is an electrifying site." Metropolitan Reality Associated LLC bought the deteriorating building in 2005 and completed an award winning renovation in 2007. Unlike some of Paul Rudolph's works struggling for existence, his creation at 1000 Endo Boulevard is occupied and houses the headquarters for Lifetime Brands. 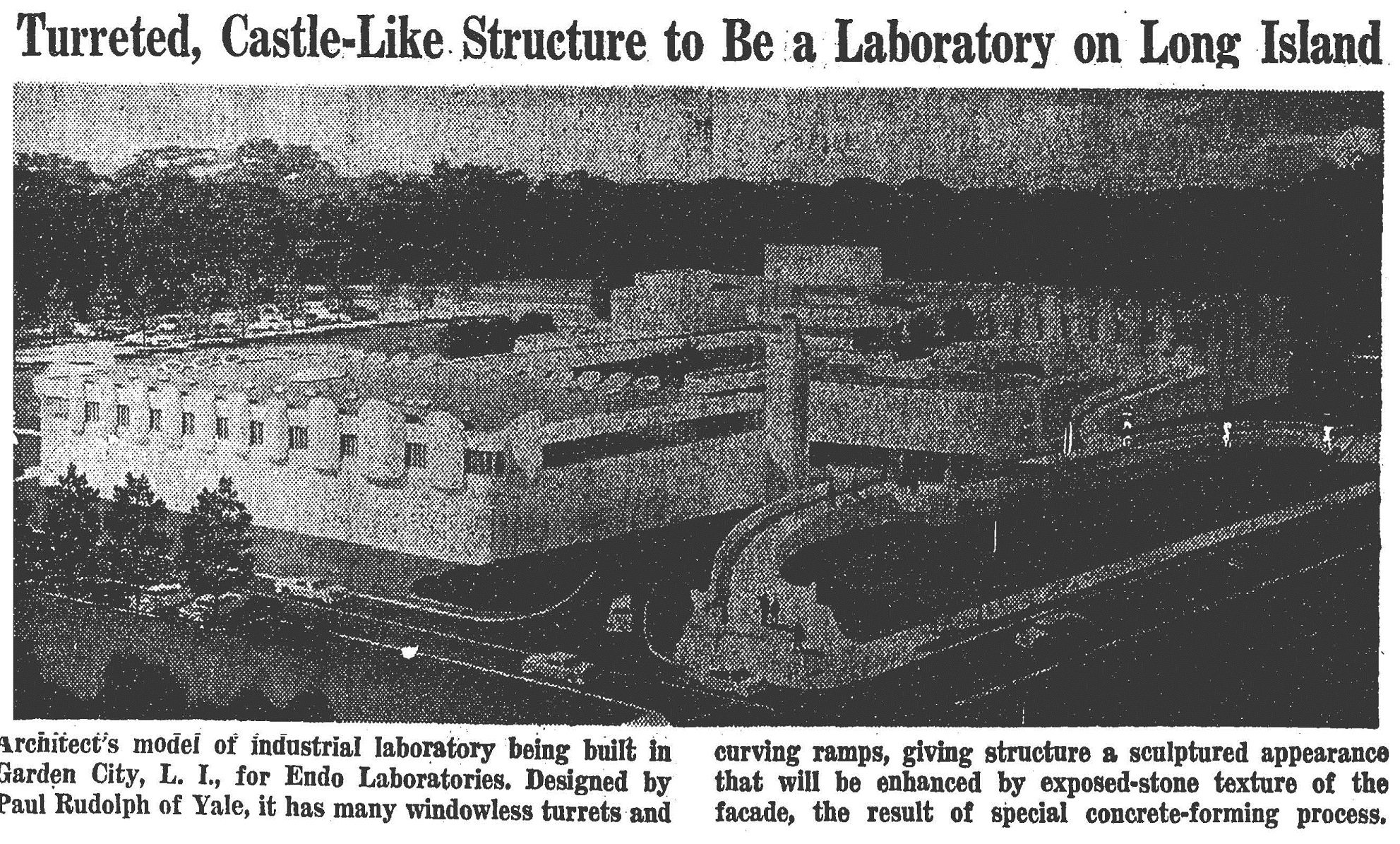 UMassachusetts Dartmouth Library has developed an interesting website devoted to Paul Rudolph and his works, with archival material and photographs.

Stuart Roeder, a Warner Brothers PR executive, purchased a cottage at the western edge of the Pines, enlisting Horace Gifford for its transformation. Completed in 1969, the Roeder House revealed Gifford's affinity with the Brutalist movement, but Gifford channeled the concrete forms of Brutalism into light wooden structures. This amazing renovation was documented by House Beautiful magazine in 1970. For more images, visit Pines Modern. 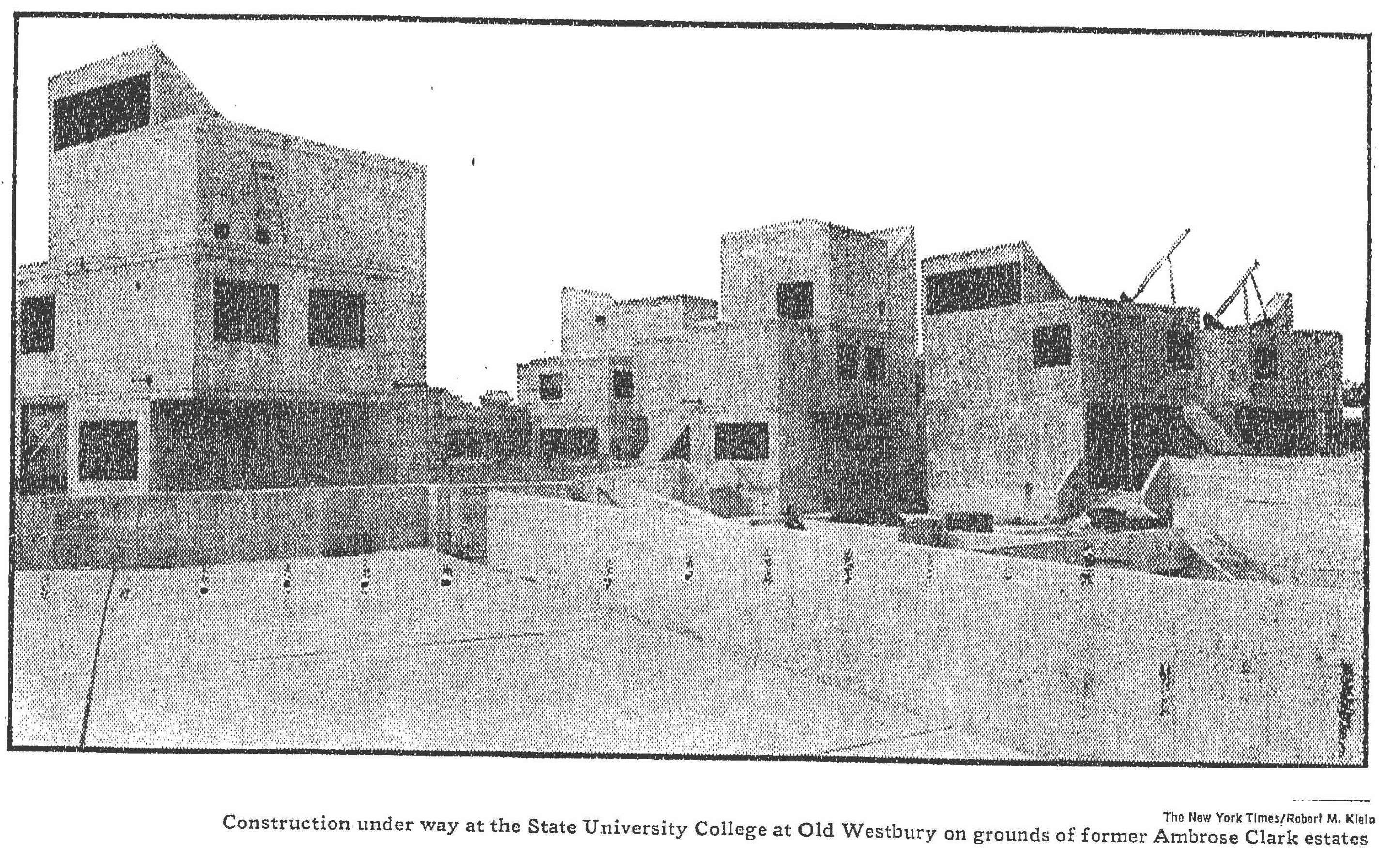 Old Westbury opened as a public liberal arts institution in 1968 at Planting Fields, Oyster Bay. After a reorganization, the university re-opened on the former Clark estate in Old Westbury in 1971 with a mandate to to educate a diverse, multicultural student population and a curriculum organized around an exploration of “the riddle of human justice.”  The College attracted one of the most diverse student bodies in the nation and, at that time, it was one of the few colleges nation-wide that housed married students in its dormitories and provided day-care facilities. Johansen's vision for the academic village was that of a concrete hill town - "an accretion of many habitable enclosures as though they had grown together casually over time. Except for fire or medical emergencies, only narrow pedestrian ways led in and out-small bridges, steps and courtyards quite like those we know in Greece or medieval Italy". More about Johansen and the project can be found at johnmjohansen.com/Hill-Town. Just prior to destruction, a Brutalism enthusiast posted some good photographs of the structure. There is also a YouTube video showing some still photos of the old academic village .